April 1957. “Teenage girls in car at drive-in.” From photos for the Look magazine assignment “How American Teenagers Live.” 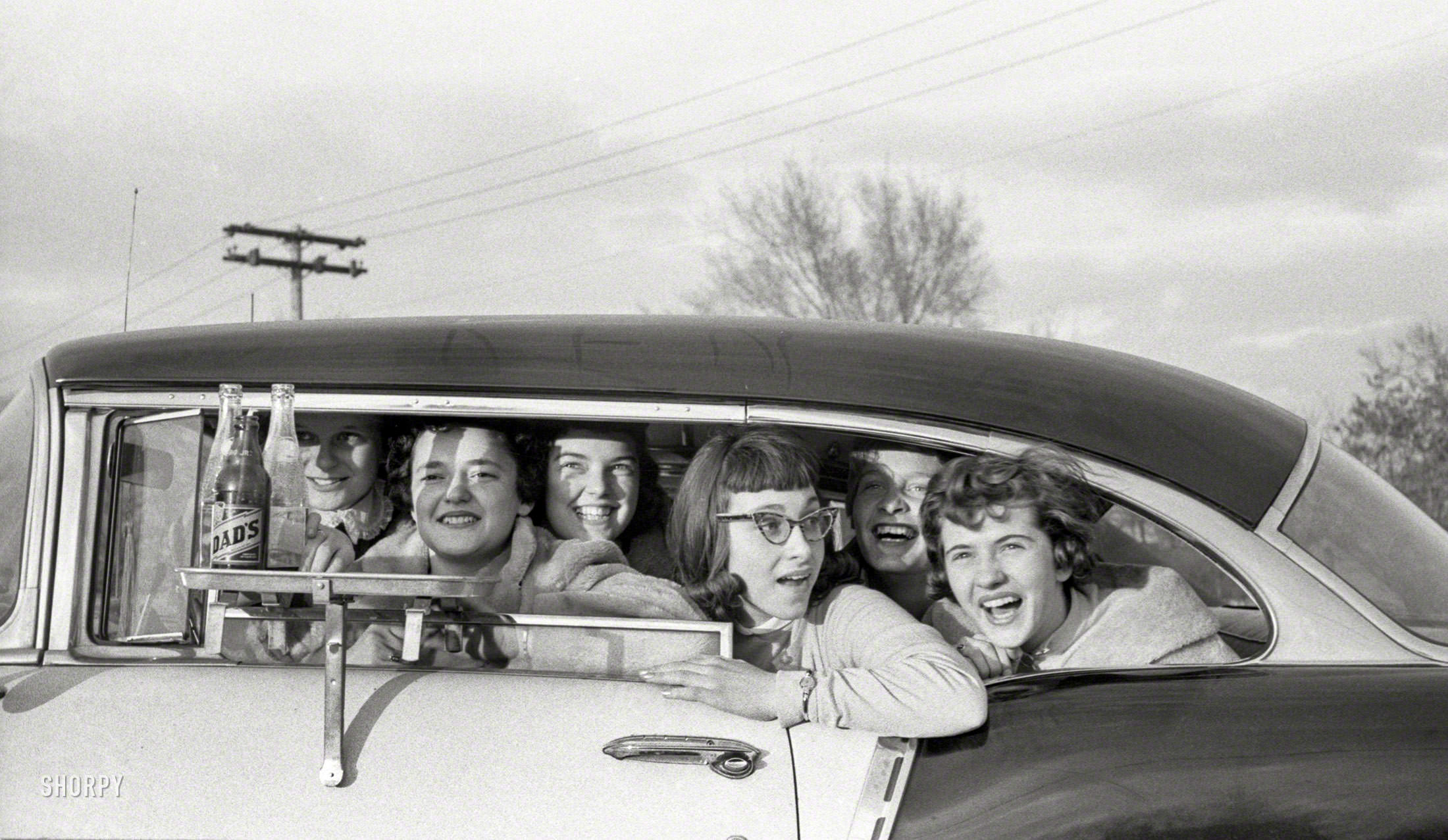 Posted by NJBiblio on November 17, 2017 in Daily Photo

The worlds created in popular literature, television, and film universes are extraordinarily deep, and as a result many aspects of these worlds and cultures are very throughtout and rich for exploration.  Unfortunately, illicit drugs and substances are no exception.  Drawing heavily from science fiction, but also including other genres, today’s infographic takes a look at several fictional drugs and other substances (for better or worse) you can find in literature, TV, and film.  [VIA]

Posted by NJBiblio on February 23, 2017 in Infographics

“Inspired by one of the greatest creative minds in the English language—and William Shakespeare—here is an officially licensed retelling of George Lucas’s epic Star Wars in the style of the immortal Bard of Avon. The saga of a wise (Jedi) knight and an evil (Sith) lord, of a beautiful princess held captive and a young hero coming of age, Star Wars abounds with all the valor and villainy of Shakespeare’s greatest plays. ’Tis a tale told by fretful droids, full of faithful Wookiees and fearsome Stormtroopers, signifying…pretty much everything.

For starters, I was almost literally born and raised on Star Wars — I’m only one year older than the franchise.  That brings with it certain biases, including the fact that I hold the original trilogy in my heart with a special reverence for all the happy memories, both as a child, and as an adult, that it brings me.  I also know all three movies in their original forms by heart (and yes, Han will always have shot first!).  Seeing that this unique take on the series had me very excited, and I was far from disappointed.

I admit, that when I first got the book, I was skeptical at how it would play out.  It was either going to be a truly groundbreaking new approach to popular literature and film, or it was going to be an absolute joke.  Fortunately, I think Shakespeare himself would be proud of the results.  Staying true to the original script, Doescher places a very bard-like spin to it that allows anyone even remotely familiar with the film and the story to follow along with no difficulty.  When you have lines like: “But unto Tosche Station would I go, And there obtain some pow’r converters. Fie!“, I think you know where we are in the film!  And I agree, Luke sounds whiny here too!

The writing style is exactly as you would expect from a William Shakespeare five act play.  In fact, it is written as a script, only lacking some stage direction, but containing all the description and scene setting you would expect from any script.  Inner dialogues are spoken aloud, and actions explained in the same way.  While we can see these on screen, simple gestures and actions are either written in as direction, or described by the players.  As it reads, there would be no doubt that any acting company could easily put on a production of this work.

Granted, there is a little bit of cheek, and some subtle nods to both Shakespeare and Star Wars fans alike, but they are hidden almost like Easter eggs throughout the text.  For example, this couplet, a favorite tool of the Bard’s, gives a tip of the hat to the “Han shot first” fans:  “I pray thee, sir, forgive me for the mess/And whether I shot first, I’ll not confess.- Han Solo”.  There are even points in the book where we see action or have a look at some inner dialogues that we don’t see in the film, for instance a Hamlet-like soliloquy by Luke, lamenting the death of the Stormtrooper whose uniform he has stolen on the Death Star: “[Luke, holding stormtrooper helmet.] Alas, poor stormtrooper, I knew ye not, Yet have I ta’en both uniform and life From thee. What manner of a man wert thou?”   Even something as simple as “Once more unto the trench, dear friends, once more!” during the penultimate battle gives a little grin when you get both references.

I simply cannot sing the praises of William Shakespeare’s Star Wars enough.  Perfect for fans of both Star Wars and Shakespeare, it will have you coming back again and again, just like the original.  I personally have recommended this to patrons who enjoy the films, but have poo-pooed plays and Shakespeare both.  Everyone has loved it so far!  I just can’t wait to see the stage production!

Posted by NJBiblio on September 25, 2014 in Reviews

Posted by NJBiblio on February 11, 2014 in Daily Photo

Evolution of the Wolverine

Just a fun infographic for this sweltering Friday!  Superheroes and comics have always been a hobby of mine and the X-Men, and especially Wolverine, have been my favorites for as long as I can remember.  Even I forgot how many times his costume has changed over the years though….almost as many as Batman’s!!  Created by halloweencostumes.com, this infographic is just in time for the new Wolverine movie hitting theaters next week! [VIA]

Posted by NJBiblio on July 19, 2013 in Infographics

June 1937. “Idle men attend the morning movies. There are three such movies in one block. Oklahoma City, Oklahoma.” Photo by Dorothea Lange for the Farm Security Administration.

Today’s video from the PBS Off Book series takes you through the concept of fan art — where artists take established characters from TV, movies, video games, cartoons, etc. and either create their own visual pieces of fiction that includes those characters in new or unique situations.  Learn how many artists got their start drawing fan art or writing fan fiction and how it provides a very unique and creative outlet for them that is also accessible to the masses.  It is interesting to see what is the evolution of a subculture among artists and fans of the subjects as well as some of the unique pieces and “mash-ups” created.

The History of Hollywood

You hear “Hollywood” today and probably instantly think of the film industry and mega-movie stars, but it wasn’t always this way.  From its humble beginnings as part of a ranch turned residential community in 1886 through 2001, where Hollywood is like we know it today, this infographic traces the history and growth of this small town as it grew and became embraced by the film industry. [VIA]

Posted by NJBiblio on April 12, 2013 in Infographics

Tweeting and the Oscars

Nothing brings out the social media bug in all of us like celebrities and what bigger gathering of A-list celebrities is there than last night’s Academy Awards ceremony?  UK bases Silverbean took a look at just how social the Oscars were with an analysis of the Tweets from during and after the ceremony, awarding their own winners, crowned by sheer number of mentions in tweets. [VIA]

Posted by NJBiblio on February 25, 2013 in Infographics