April 1939. “Old Negro [former slave] with horn with which slaves were called; Near Marshall, Texas.” Additional title: [An African American man sitting in doorway and holding a horn, April 1939.] Gelatin Silver print by Russell Lee for the Farm Security Administration. 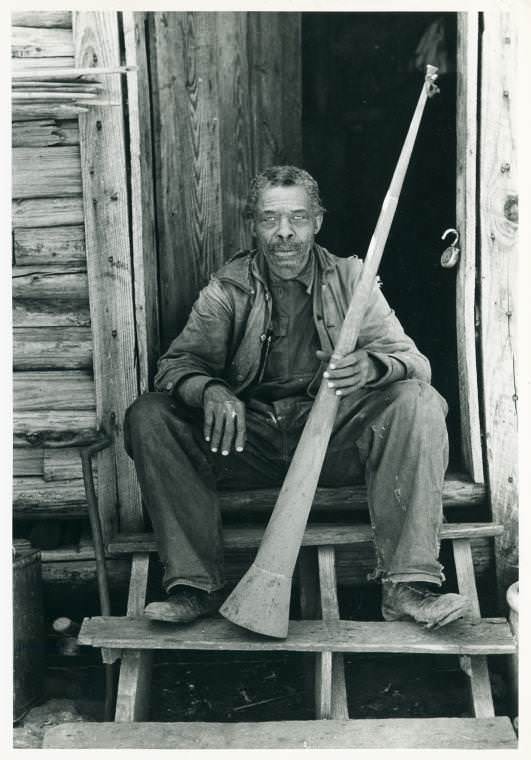 Posted by NJBiblio on December 19, 2018 in Daily Photo

There are state flags, state mottos, state birds, state quarters, so why not take a look at state mammals too?  From dogs to whales, and even squirrels and raccoons, the mammals that each state chooses as being representative of them are as unique as the states themselves.  [VIA]

Posted by NJBiblio on December 17, 2018 in Infographics

The History of Income Taxes — Infographic

The History of Income Taxes

On Friday, we posted an infographic on funeral and burial customs — half of Ben Franklin’s death and taxes.  Well, it’s jsut fair that we look at the other half — taxes.  Today’s infographic takes a brief look at the history of income taxes in the United States.  [VIA]

Posted by NJBiblio on March 13, 2017 in Infographics

How The 50 States Got Their Names — Infographic

How the 50 States Got Their Names

Each state is unique in so many ways, including their names!  While the origins of some are rather obvious, others have pretty interesting backstories and truly reflect the cultures and geography of the region.  [VIA]

Posted by NJBiblio on February 22, 2017 in Infographics

These young men are collecting paper and what look like tin cans (I am sure at other times had collected other items as well) for a scrap drive. Most of these items were reused or recycled to support the American war effort in World War II.

May 1942. Southington, Connecticut. “Boys collecting paper and metal for scrap drive.” Photo by Fenno Jacobs for the Office of War Information.

Posted by NJBiblio on February 3, 2017 in Daily Photo

Oldest Businesses in Each State — Infographic

The Oldest Businesses (continually operating) in Each State

Most businesses in the US had their start when the areas were first settled, if not when the state itself entered the Union.  While many have closed for a variety of reasons over the years, come have survived for well over three centuries.  This list hits jsut about every industry, so the term business is used in a general way here, so it’s also interesting to see that variety as well as the ages of the businesses themselves.

New Jersey’s entry, the Barnsboro Inn, is right in my backyard and I have eaten there many times!  What’s your state’s oldest surviving business?  [VIA]

Posted by NJBiblio on January 31, 2017 in Infographics

Even in the midst of the most harrowing war the world has ever seen, it’s wonderful to see these playful images of our soldiers escaping and enjoying the little things, like a mascot kangaroo, for a little while.

September 10, 1942, somewhere in Australia. “American soldier at advanced allied base with his pet kangaroo.” Photo by John Earl McNeil.

Posted by NJBiblio on December 9, 2016 in Daily Photo

There is so much going on in this photo, it would take some time to soak it all in.  I am especially taken by the juxtaposition of the tenement with the dome of the US Capitol and all it symbolizes rising in the background.

Summer 1935. “Washington, D.C., alley dwelling. The clutter of filth, debris and tin cans all have highly utilitarian purposes. Many of the houses are without gas, water, or electric connections.” Note the Capitol dome at the top of the frame. Harris & Ewing glass negative

Posted by NJBiblio on December 6, 2016 in Daily Photo

I love this one, not only because it is local, but because of some unique things in the photo itself.  The photo was taken at night so a longer exposure was needed to capture a good image.  As a result you capture blur from motion — most notably in the boy just to the right of center and in the center boy’s hand as he works the glass.  What you really need to do to appreciate this, however, is zoom in on the boy to the far left — notice anything interesting about his eyes?

Posted by NJBiblio on December 2, 2016 in Daily Photo

Use the images posted in this feature for writing prompts, warm-up activities, drawing templates or as part of an artwork critique.

One of the most important and known pieces of American art, this painting it also known as:  Westward the Course of Destiny, Westward ho!, or Manifest Destiny.  It is rich in American symbolism at a time when westward expansion was at its height and there was a renewing sense of optimism in the nation following the Civil War.

Posted by NJBiblio on December 1, 2016 in Daily Art