20 Bizarre Foods From Around the World — Infographic

Some people are adventurous eaters — or they claim to be, but have they tried any of these delicacies from around the world?  From oysters that really aren’t, unique (to say the least) fish preparations, eggs cooked in pee, and just plain bugs, TasteAtlas put together this list of foods that rank up there as some of the most unusual, bizarre, and sometimes plain gross (to a non-local) foods from around the world.[VIA] 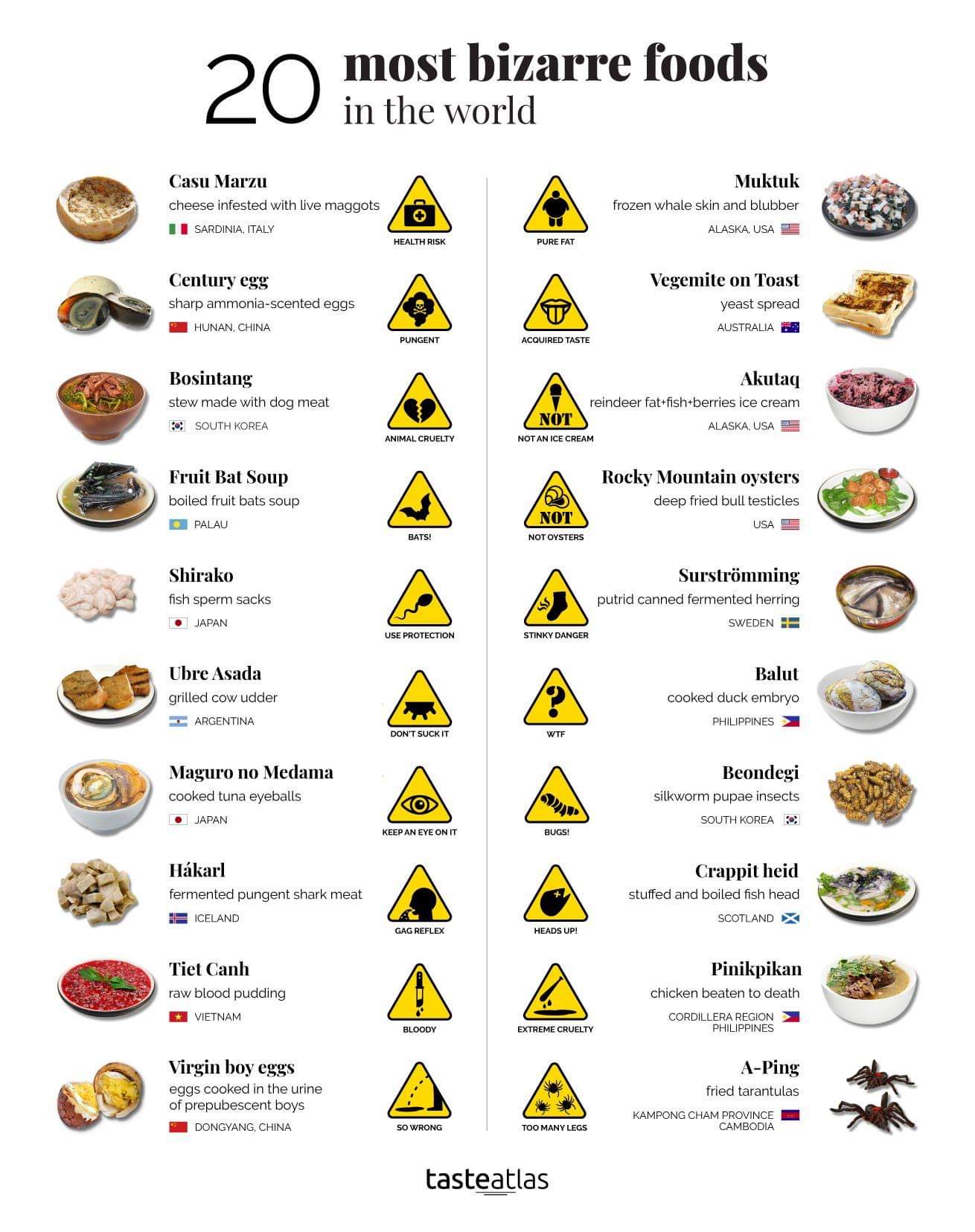 Posted by NJBiblio on February 4, 2019 in Infographics

We all speak at least one, and some of us know dozens — even if you’re not aware of it!  Language, and communication in general, is a key to learning, living, and working in the world.  Today’s infographic gives several fun facts you may not have considered about the languages we know and speak.  [VIA]

Posted by NJBiblio on January 10, 2017 in Infographics

Tipping Around the World – Infographic

Here in the United States it has become customary to tip those in the service industry.  In fact, it has become so expected that for most it’s actually considered part of their salaries.  This is not the case around the world, however.  Today’s infographic gives a great snapshot of customs for tipping around the world.  Learn the customary percentages and where tipping may even be considered an insult!  A bonus section also breaks down customary tips for other service industries outside of restaurants. [VIA]

Posted by NJBiblio on July 1, 2013 in Infographics

It seems today that there is a word for everything — and if there isn’t yet, someone will make one up!  Did you know, however, that there are 19 emotions that are recognized in other cultures that we have no words for in English?  Today’s infographic places these emotions on a spectrum with those that we are already familiar with.  It is an interesting study into the nuances not only of language and culture, but also of emotion to see the subtle differences that can arise from basic emotions and feelings that we all recognize. Sometimes it makes me a little jealous of Mr. Spock!! [VIA]

Posted by NJBiblio on May 9, 2013 in Infographics

The Stories Behind Famous Monuments

They are instantly recognizable and millions go to see them every year (with one exception) but do we really know the stories behind these modern (and ancient) wonders of the world?  Today’s infographic helps to share a little of each monument’s story.

The Stories Behind Famous Monuments infographic
Leave a comment

Posted by NJBiblio on April 9, 2013 in Infographics

Today’s video from the series Crash Course: World History explored the foundation of the Mesopotamian culture.  As one of the first civilizations to create cities, the Mesopotamians are also credited with giving us writing, taxes, and a codex of laws that still are followed in many modern cultures.

Posted by NJBiblio on April 8, 2013 in Daily Video

The Perfect Cup of Coffee

OK, I freely admit it — I’m addicted to coffee!  Usually I can get by with a freshly brewed cup with a little cream, but sometimes I get a little adventurous.  I see the names all the time — Caffe Americano, Mocha Breve, Caffe Au Lait — but oftentimes don’t know just what they are or hoe to make them.  Today’s infographic is a great guide to several espresso drinks to help you feel like an expert next time you go to the counter. Who’s up for grabbing a Caffe Affogato with me? [VIA]

Posted by NJBiblio on April 2, 2013 in Infographics